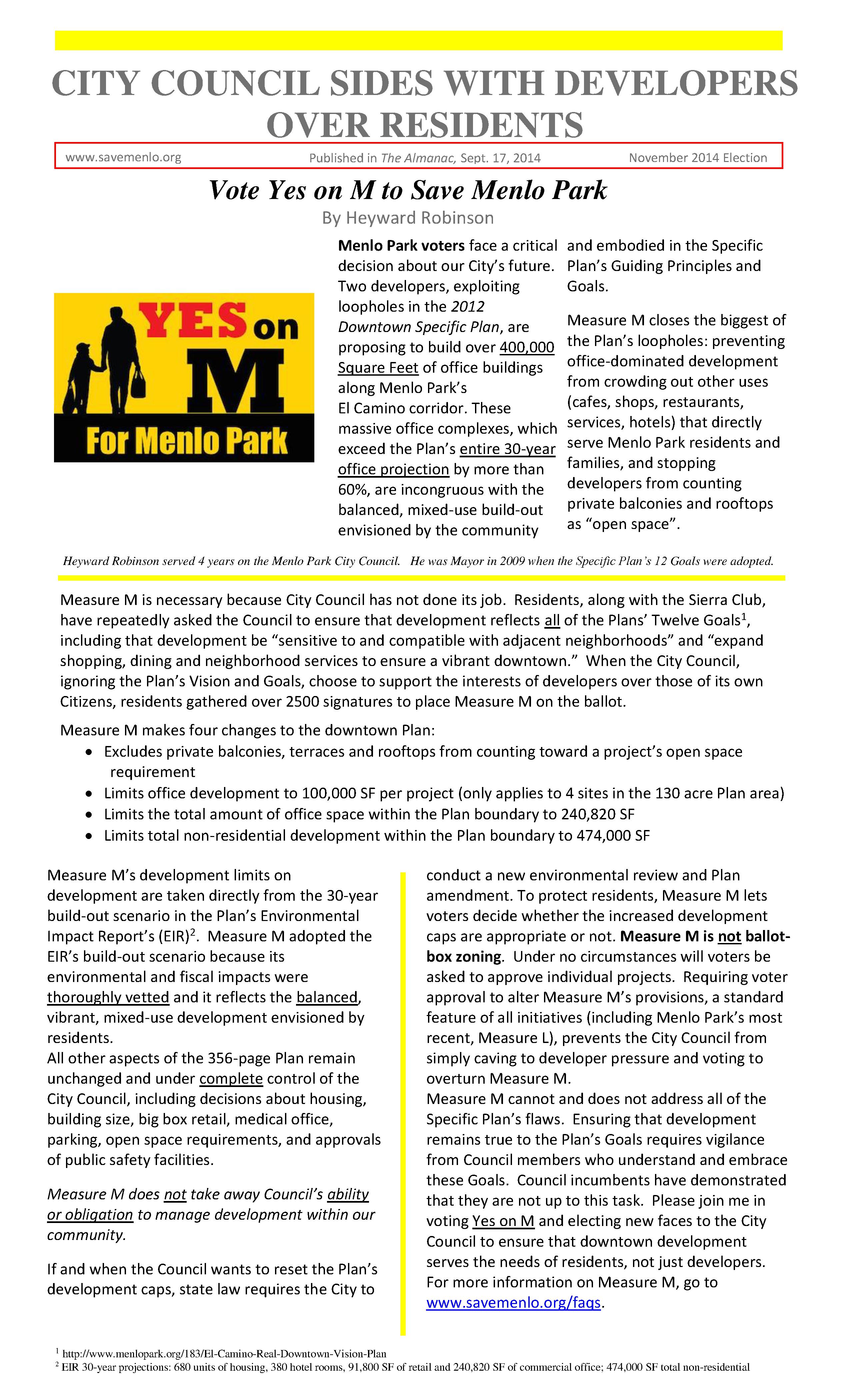 I have been a member of the Menlo Park Planning Commission since 2007 and was chair of the Commission when the Specific Plan was reviewed. I am appalled at the maliciously inaccurate information being given to voters by the anti-M campaign funded by out-of-town developers.

The facts are: Yes on M limits offices, restores public open space and helps to protect us from traffic nightmares. If we do not act, I believe that too much office will crowd out local shops, restaurants, and services for residents.

The developer’s glossy mailers and paid phone callers are claiming that Measure M will: Increase traffic, require an election every time the council wants to act, crowd schools, open the door to unwanted development, cause litigation, impact the fire station, and more.

I can tell you that every single one of these claims is highly speculative and or flat out wrong.

The Verdict Is In: Stanford's Massive Offices Will Cause More Gridlock

This week the city was finally forced to released an independent traffic study that revealed that the massive office project by Stanford and developer John Arrillaga will permanently worsen traffic on El Camino and nearby streets.

The study found that intersections of El Camino Real with Menlo and Ravenswood avenues would “operate unacceptably.”   The large office project would double morning traffic and triple afternoon peak traffic delays on El Camino.   Intersections will degrade to "F" grade.  Neighboring streets in Allied Arts would be similarly impacted.

These facts echo the concerns of the thousands of Menlo Park residents who signed petitions to put Measure M on the ballot.  Only by voting YES on M can we keep office development to a reasonable scale, restore public open space, and ensure that voters – not developers – decide what Menlo Park looks like.

Last year, the current City Council, under the influence of big developers, accepted and waived known significant negative impacts on 14 other intersections throughout the city in the Specific Plan.    With the strong influence of the developers on the current City Council, we need every Menlo Park resident to donate, volunteer, and vote YES on M to protect residents, our town and our neighborhoods from traffic.

6 Important Myths Vs Facts on Yes on M

6 Important Myths vs Facts on Yes on M

We are concerned about the misleading information from the Stanford No on M campaign. We want to reiterate, unequivocally, that Yes on M is essential to protect our quality of life and save our neighborhoods from additional traffic.

Two large office projects - nearly 8 football fields of offices – are about to be built on El Camino. These will bring thousands of additional of cars to the heart of our town.

Yes on M limits the size - and accompanying commuter traffic of the office developments, to nearly half. This protects neighborhoods from rush hour and cut-through traffic.

Instead of vacant lots, or mega-offices, Yes on M promotes local shops, dining and services for residents.

Developers are trying to distract people by putting out misleading information. These are scare tactics of the developers. They threaten that if we don't give them a sweetheart deal, they will build something even more appalling for our community.

That's what they always say to get their way.

Remember, this is our town and our home.  Please Vote Yes on M to protect our neighborhoods,

For more details, read on.

Here are the facts:

Facts: The worst traffic problems in Menlo Park are due to office commuters at peak hours. The construction of mega office buildings in the heart of our small town— as now allowed by the Downtown Specific Plan—will inevitably lead to heavier rush hour congestion and more cut-through traffic in our neighborhoods. By capping the amount of office space and overall development along El Camino, Yes on M will reduce rush hour traffic.

Facts: Yes on M limits the maximum development of offices, including medical offices, in the downtown area. This reduces traffic. If our community wants additional reductions to the amount allowed for medical or any other type of office, the Council has the ability to impose those restrictions. Measure M does not prevent the City Council from taking additional actions that protect our community.

3. Development along El Camino Real.
Facts:  The Stanford property was leased out under a 50 year lease to AutoNation – until last year.  That’s why that had been vacant. You’ve seen that new development along El Camino has already begun and will continue under Yes on M. However, instead of being confronted for decades by massive office buildings best suited to a big city, Yes on M will ensure that Menlo Park will attract true mixed-use developments designed to enhance its small-town ambiance.

4. Schools
Facts: The City Council’s own study concluded that Yes on M will have no impact on school revenues, expenditures, or enrollment.

5. Council maintains control over big box retail, housing, and parking
Facts: Measure M requires a public vote if, and only if, the City Council decides it wants to change the amended Plan’s development caps or what counts as open space. Every other requirement and guideline in the 356-page Plan remains unchanged and under the Council’s control.  They make decisions about housing, big box retail, medical office space, surface parking, and approvals of public safety facilities such as fire stations. Under Yes on M, voters will never be asked to approve a specific project.

6. Open space.
Facts: The Vision that was supposed to guide the Downtown Specific Plan allowed for higher density in exchange for more public open space. Instead, a Plan loophole allows developers to count private rooftops and balconies as open space. Yes on M closes this loophole and ensures that required open space is just that—space open to the public.

Vote Yes On M To Protect Our Neighborhoods

New Maybell Project Half As Big

New plans have been submitted for the Maybell Avenue site in south Palo Alto that call for about half as many residences as a previous proposal that was shot down by voters last year in Measure D.

Neighbors said the project was out of character for the residential neighborhood and would increase traffic on Maybell Avenue, a busy street used by kids who ride their bikes to schools in the area.  After council unanimously approved the Housing Corp.’s project, residents gathered signatures and got Measure D on the ballot to stop it. Last November, Palo Altans voted to kill the project, 56.5% to 43.5%.

The vote was widely seen as a referendum on the rapid development taking place in Palo Alto, and the traffic it was causing.  The election fueled the Residentialist movement that has prompted several candidates to jump into this fall’s council race, hoping to defeat the incumbents who supported the Maybell project and other large developments.

Before last year’s vote, council members and other proponents of the Maybell project warned that if the plans were rejected, the existing zoning of the property would allow the next owner to build a much larger development than the Housing Corp. had proposed.

A rebuttal ballot statement signed by Councilwoman Karen Holman and four others said: “It’s likely that the land would be sold to a private developer who could build 46 residences.  These 46 multi-bedroom residences would have a much more significant impact on local traffic and schools than the current proposal which includes mostly one-bedroom senior units.”

But instead the new project will have 25 apartments and five single-family homes, about half the size of the Housing Corp.’s proposal.

“On the surface, it certainly seems like much less than all of the doom and gloom that (the council) had talked about,” said Tim Gray, one of the leaders of the referendum.

“It honors the rules that we’ve all lived with … It’s a vindication,” he said.

Gray said that he believed then-mayor Greg Scharff and current Mayor Nancy Shepherd had played a large part in making residents fear what could be proposed on the site in an effort to justify their vote to approve the senior housing project. Scharff and Shepherd are running for re-election to council in November.

“At no time did I ever say this was `doom and gloom’ … I had no idea what the intentions of the (next) developer would be,” she said. “I hope that this proposal meets the community’s expectation.”

Scharff said he was happy with the new proposal. “I hope the community gets what it wants,” he said.

Because the new plans do not ask for any exceptions from city zoning codes, the new project will not have to go before the council for approval. The plans will be reviewed by the Architectural Review Board.

The Post reported April 30 that Han bought the property for $22 million, which was $6.4 million more than what the Housing Corp. paid for it in 2012.

Rebuttal to Argument Against Measure M 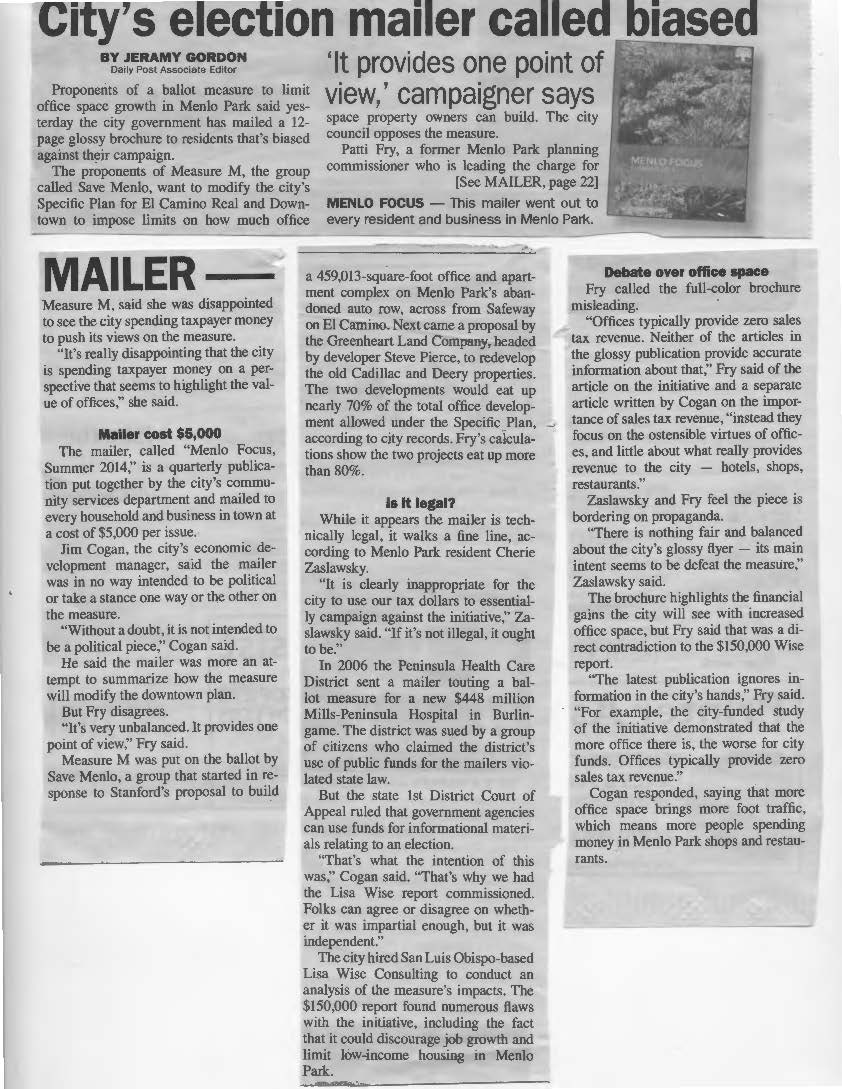 Members of the group Save Menlo have written a letter asking the city of Menlo Park to throw out a consultant's allegedly flawed report about the potential impact of their ballot initiative on a downtown growth plan.

The letter, sent late Thursday night, alleges that the $150,000 analysis by Lisa Wise Consulting Inc. contains more than 40 errors and is tinged with biased undertones.

It also faults the study for omitting major projects proposed by Stanford University and Greenheart Land Co. within the area where growth is guided by the El Camino Real/Downtown Specific Plan.

Menlo Park CA, May 12 – Today, Menlo Park residents submitted substantially more signatures than required to put the Initiative for Livable and Walkable Menlo Park on the November Ballot.  The purpose of the initiative is to reinforce the community’s vision for Menlo Park by promoting a balance of uses and open space.

SaveMenlo (www.savemenlo.org) exceeded its signatures goal by 43%.  Signatures were gathered in every Menlo Park neighborhood from Hamilton Avenue to Sand Hill Circle, and from residents of every age group from 80-year olds to 18-year olds and grandparents to young mothers with newborns.

“We are so proud of Menlo Park today and all the volunteers and supporters who really rallied to make this happen,” said Mike Lanza, an initiative proponent.  “So many Menlo Park residents worked hard to get these signatures.  The good people of Menlo Park want to have a voice in their town and are willing to do what it takes.”

“We heard very clearly from the residents of Menlo Park that they want to maintain the high quality of life in their town. They want to be able to drive, walk, or bike safely and easily.  They want a vibrant mix of neighborhood retail and housing.  They want fiscally responsible development.  And they want to enhance public open space.”

Concerned residents launched the Initiative after a year and a half of meetings, emails and petitions to City Council went unheeded.  Bright yellow lawn signs dotted Menlo Park front yards supporting the initiative.  Enormous signs went up on top of family mini-vans.  Kids volunteered and put out flyers on doorsteps.  And scores of volunteers went door to door and collected signatures from neighbors.

“As a long-term resident encouraging residential quality of life and sound planning to support it, I am gratified that an entire new generation of residents support the initiative,” said Patti Fry, former Chair of the Planning Commission.  “A large number of the volunteers have never engaged before in local politics and a large number of supporters are first-time voters in Menlo Park. All share a concern about how their quality of life will be affected by what the Specific Plan’s rules currently allow. They are shocked by proposals for large office buildings where they expected senior housing, a revenue-producing hotel, and more community-serving retail. They like the vision of a livable, walkable and revitalized downtown, and the balanced development portrayed in the Plan. They are hopeful this grassroots effort will prompt city officials to adjust the Plan’s rules by adopting the initiative. If not, they are ready to get out the vote in November.”