Developers are spreading misinformation about M and what it does.  Get the truth here. 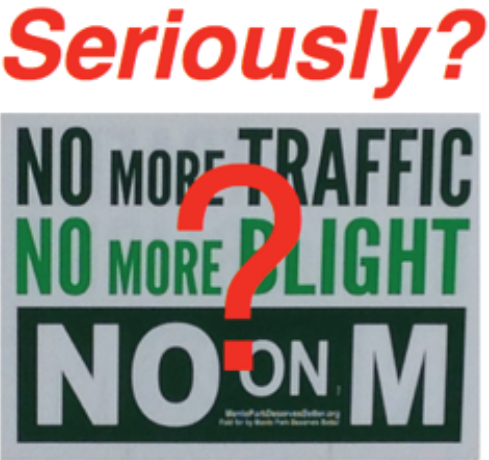 FACTS: Developers are seriously misleading you.  Ninety percent of downtown office commuters drive from outside Menlo Park during rush hour.  Stanford’s project alone will generate over 3000 trips per weekday[1].  Greenheart’s similarly sized project will double that.  YES on M reduces rush hour traffic by cutting the amount of allowable new office in half.

Myth: “No Blight” – Office development is the only viable use for El Camino’s vacant lots

FACTS: More fiction.  Yes on M encourages balanced, mixed-use development.   Having shops, restaurants, services, housing and offices in close proximity reduces traffic and makes each business more profitable and the underlying real estate more valuable.  Yes on M is a win-win for everyone.

FACTS:  They haven’t.  The changes are all cosmetic - there are still 199,500 SF of office buildings.  See for yourself.  To learn the full story on what Stanford changed, read Heyward Robinson’s blog post “Extraordinary Untruthful” You be the judge.

FACTS:  Walmart isn’t coming to Downtown Menlo Park.  And even if they wanted to, City Council can say "no" to Walmart or any other use it does not wish to approve.

FACTS: Wrong.  Yes on M caps the maximum development of offices in the downtown area (including medical offices) — this reduces traffic. Yes on M does NOT restrict the City Council’s ability to impose additional limits on medical offices if it wishes to do so.

FACTS:  False.  Developers are trying to scare parents with misleading claims about money for schools.  According to the City Council’s own study, Yes on M will have no impact on school revenues, expenditures or enrollment.  “Approval of the Ballot Measure should not lead to increased expenditures or a loss of revenue as compared to the ECR/D Specific Plan for the school districts.”

FACTS:  Untrue.  “El Camino no place for raising kids” says MPCSD and SUHSD Board Member Gordon Lewin's in an excellent letter to the Almanac.  The Specific Plan was supposed to create housing near shops and restaurants that would be attractive to seniors, thereby helping Menlo Park meet its required State housing quota without increasing school enrollment.  Instead, Developers are providing NO senior housing and developments full of out-of-town office workers that will further exacerbate the City’s high jobs to housing ratio, forcing the City to zone for even more housing in the future.

FACTS: It’s not.  Much of M’s language is re-adopted, for clarity and precision, directly from the Specific Plan itself.  Measure M incorporates standard terms widely used in land-use initiatives. The city’s attorney reviewed Measure M before signature gathering began, and again when he wrote the voter guide’s Impartial Analysis. Since the City would have to defend the Measure when it becomes law, it was his responsibility to ensure that it would not conflict with City, State or Federal law. He made no objections, nor did any member of press or public during the period when the entire text of the Initiative was publicly posted for review.

Myth: Measure M “is Ballot Box Zoning” or “has a poison pill"

Facts:  No.  While opponents call Measure M “ballot-box zoning” and contains a “poison pill”, nothing could be further from the truth.  Measure M just limits the overall amount of office and other non-residential development within the specific plan; voters do not have to approve individual projects.  Measure M requires a public vote only if the City Council decides it wants to exceed the overall development limits or change what counts as open space.  All the other aspects of the Downtown Plan remain unchanged and under City Council control.

Myth: “Menlo Park’s development issues are too complex for voters to understand”

Facts:  Really?  Menlo Park residents are smarter than Measure M opponents think.  Measure M simply adopts limits that come straight from the Specific Plan’s Environmental Impact Report (EIR) including a balanced mix of residential, office, retail and hotel.   Measure M will restore this balance by keeping office projects from overwhelming other uses.  If and when the development limits under the Downtown Specific Plan are reached, residents will decide if more development is desired, and what type.

FACTS: Absolutely not.  Offices don’t produce ANY sales or hotel taxes, two critical components of municipal budgets.  The City’s own study found that excessive office development will cause a $282,000 LOSS to the City’s general fund[1].   In contrast, Measure M, by mirroring the balanced mix of uses studied in the Downtown Plan’s Fiscal Impact Analysis, would add over $2,100,000 to the City’s coffers annually.  If you want a healthy budget, vote YES on M.

or
Please check your e-mail for a link to activate your account.